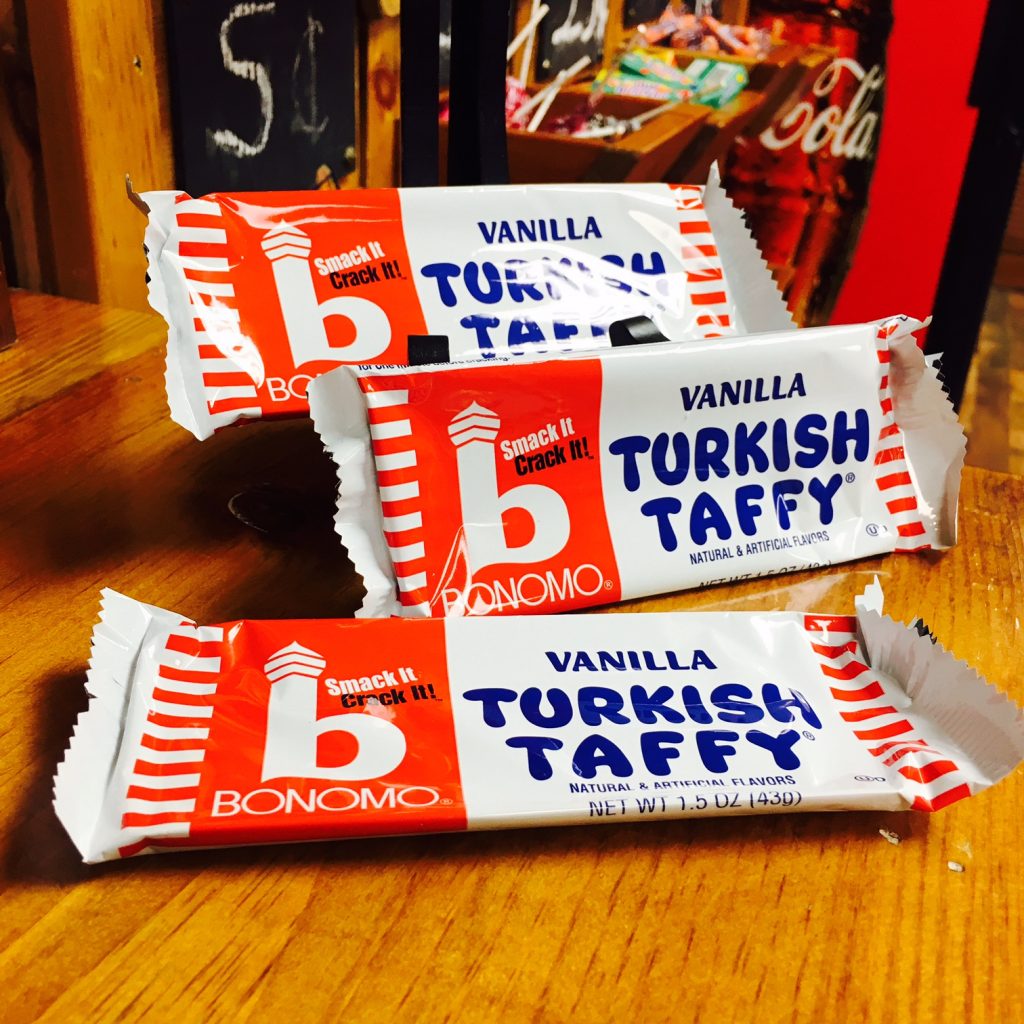 Turkish Taffy is an interesting candy. First, its not Turkish or a taffy, so what is it? Herman Herer an Austrian Immigrant created the candy in 1912.  He was making a batch of marshmallows and added to many egg whites. After some tweaking to this mistake Turkish Taffy was born!

In 1936 the Bonomo family purchased M. Schwarz & Sons. The Bonomo family is known for creating the popularity of Turkish Taffy. They dropped “Chewing” from the name and created the first foil wrapper that gave the ability to sell this heat sensitive candy in the southern market. Their big break was when they started selling Turkish Taffy to Woolworth’s department stores. They sold the candy in large slabs that had to be broken with a bull peen hammer at the counter and sold by weight. Once they created the candy bar size everyone had the ability to “Smack it and Crack it” which became one of their tag lines.

Bonomo didn’t stop there! They were the first candy advertised on TV. They sponsored “Bonomo The Magic Clown” on NBC. Of course, the Magic clown loved Bonomo candy and they talked about Turkish Taffy during each episode. Bonomo The Magic Clown created club memberships, audience participation and magic gift items. It didn’t take long for other networks to follow suit. Shows such as Mickey Mouse Club House and Wonderama were created using the same marketing techniques.

In 1972 the Turkish Taffy recipe was sold to Tootsie Roll Industry. After 60 years they tried changing the recipe and changed the name to “Soft and Chewy Tootsie Taffy” Customers quickly lost interest and the candy was discontinued.

True fans of the candy did not want to see it go! Fans started petitioning and banned together to bring Turkish Taffy back! After many blogs and discussion groups, Kenny Wiesen and Jerry Sweeney acquired Turkish Taffy and brought back the original “Smack-it Crack-it” formula. Turkish Taffy has been back in production in Vanilla, Chocolate, Strawberry and Banana flavor since 2010! Check out our website to order your favorite flavor of Turkish Taffy!