Known for its sugary white, orange, and yellow color, whether you love it or hate it everyone knows what Candy Corn is since its very symbolic for Halloween.

At first candy corn had nothing to do with Halloween or the fact that it was autumn, it had to do with the nature of work which made it seasonal. The lack of machinery had an effect of candy corn being produced year round. It was first created in the 1880’s by a man named George Renninger who worked for a candy company named Wunderlee in Philadelphia, Pennsylvania. After the candy was produced for the first time, the Goelitz Confectionary Company followed to create these “corn kernels,” calling the candy chicken feed. Their slogan was, “Something worth crowing for!” With a picture of a colorful rooster on the packaging. 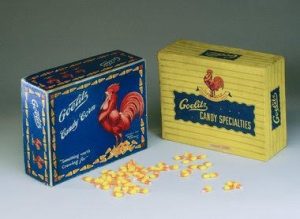 Ever since then, they have been producing it since 1898.
Candy Corn was made in large kettles consisting of corn syrup, sugar, and other ingredients. The fondant and marshmallow were added to give the candy a smooth consistency. To get the kernel shape, workers poured the warm candy into a bucket called a runner. Then pour them into a cornstarch tray. This is called the corn starch molding process. To achieve the tri-color mellocreame candy it is poured with each color and then settled to cool down. For the final step, they glazed it with confectioners’ sugar for that nice shine! This candy has been around for a little over 100 years. As National Candy Corn Day approaches on October 30th, we are honoring the production of billions of candy corn. Although it is very symbolic for Halloween, there are other colors available for Christmas and Valentine’s day.